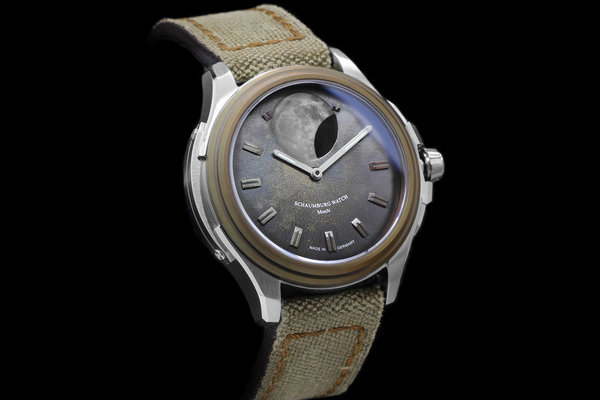 The Urbanic MooN Crater with the handmade dial is an evolved, new edition of the mechanical high-tech moon phase watch first introduced in 2011 to the firmament of the watch sky. With its 13.4 diameter representation of the lunar cycles, it offers a photorealistic and noctilucent representation of the lunar phases at all times with a maximum deviation of one day in 122.5 years, thanks to Earth shadow simming. To display the lunar cycle so accurately on a watch over a period of years requires a complicated gear train. Conventional moon phase clocks represent the 27.3217 day orbit of our earth satellite in 27.5 days and deviate by one day after only half a year. The Schaumburg Watch self-made moon phase module with pointer date as well as the basic movement SW-12 are enclosed in a striking steel case with a diameter of 45 mm and a height of 14 mm, well protected by an anti-reflective sapphire crystal and a pressure resistance up to 10 ATM, corresponding to a water depth of 100 meters. A fine leather strap, 22 mm wide at the lugs, with a functional pin buckle completes the features.

The MooN is a superlative high-tech mechanical lunar phase watch with photorealistic representation of the lunar cycles for the northern or southern hemisphere of the Earth and a maximum deviation of one day in 122.5 years. The orbital period of our earth's satellite according to sidereal calculation is 27.3217 and according to synodic period about 29.53 days. Simple moon phase clocks measure the moon cycle with 27.5 days. In order to display the moon phases exactly on a clock over years, a complicated gear train is required. Analogous to the daily shift of the moonrise by about 50 minutes, low tide and high tide occur daily about 50 minutes later. Spring tides at full and new moon illustrate the enormous power influence of the celestial satellite on any water balance here on earth. The phases of the moon therefore have a lasting influence on our lives. However, we modern humans are so far removed from the natural rhythm of light and tide that we need a moon phase clock to be aware of the current position of the moon. Thus, moon phase clocks and lunar calendars have recently experienced a tremendous renaissance. However, the shortcoming of most moon phase clocks is their inaccuracy; only a few very expensive examples maintain their accuracy for decades. Lunar cycles have always been an issue at Schaumburg Watch: our stated goal was to integrate a moon phase display that is as realistic as possible and functions as accurately as possible into a wristwatch. At 13.4 mm, the photo-realistic representation of the MooN is probably the world's largest moon phase display in an automatic watch. It is not the representation of the moon itself that moves, but an earth shadow simulation. Thus, the moon remains visible on the dial during a new moon, just as it would on a starry night. When the moon is full, the small moon on the watch shines like its large role model thanks to Superluminova luminous material. Another superlative designed by Schaumburg Watch is the optional delivery of the MooN with clockwise or counterclockwise moon phase for the northern or southern hemisphere of the earth. This in-house development is based on a novel change gear movement, which makes it possible to deliver the moon phase running left or right according to the latitude. Another highlight is the almost absolute accuracy of the moon phase display: Only in 122.5 years, the displayed lunar cycle deviates by just one single day. Just as important to us as the decades of display accuracy was the minute-accurate setting of the moon phase on the dial. The correction pusher at 8 o'clock enables minute rotation of the Earth's shadow over the moon, so that a full moon, for example, can be set precisely to 10:05 in the evening.